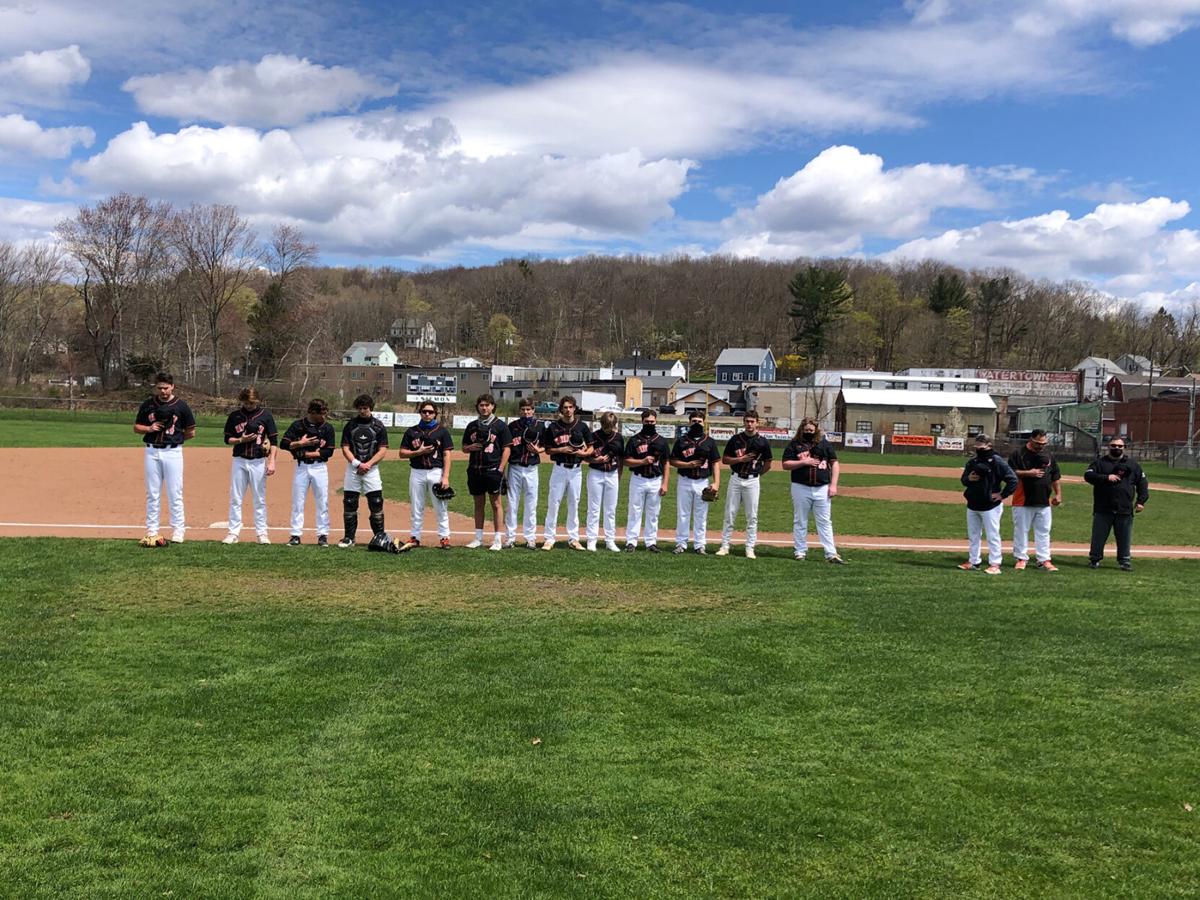 MOMENT OF SILENCE — Prior to their game against Ansonia High School on April 18 at Al Deland Field, the Watertown High School baseball team stood along the third base line for a moment of silence to honor former baseball and football coach Roger Ouellette, who was killed when he was struck by a vehicle on April 16 in North Carolina. (Dreher photo) 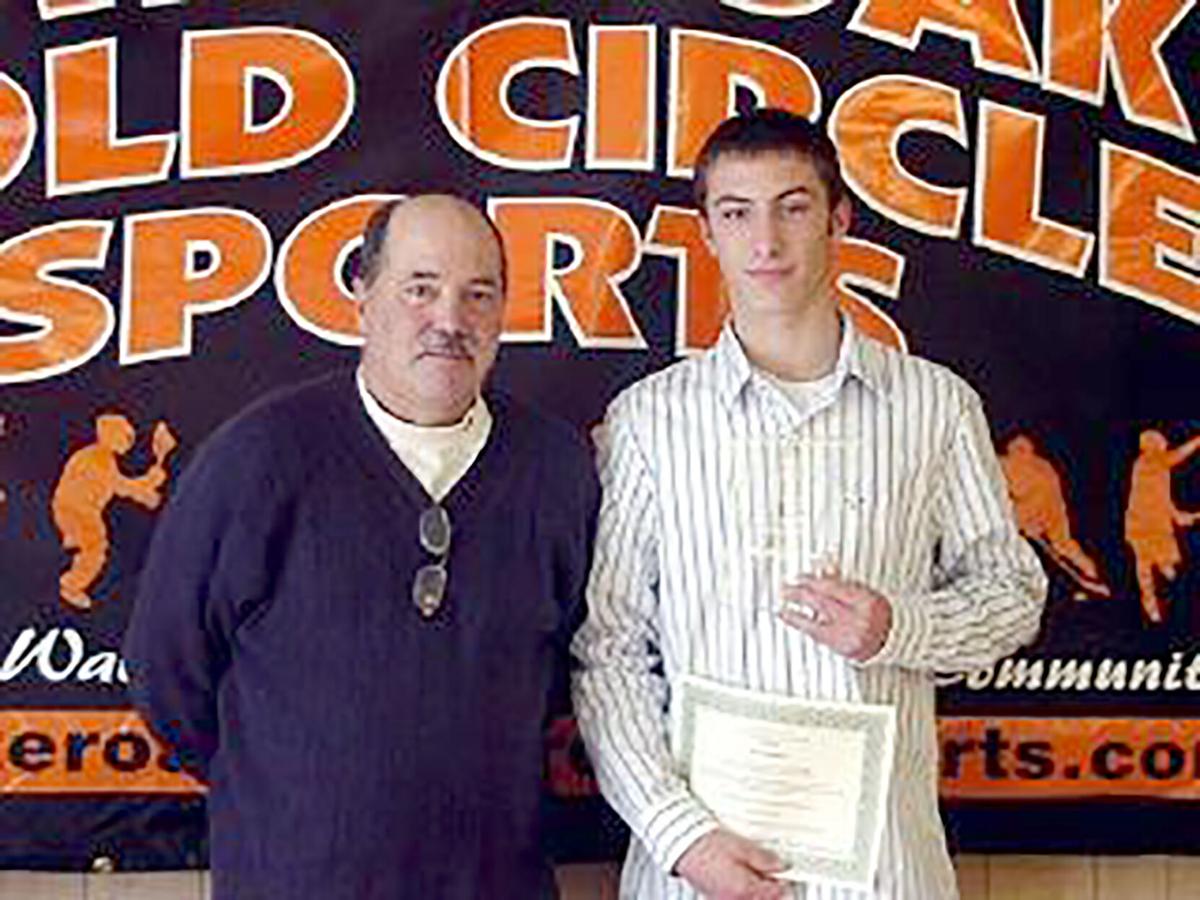 PROUD PRESENTER — Among the many organizations Roger Ouellette served during his tenure as football and baseball coach at Watertown High School was the Water-Oak Gold Circle of Sports. Coach Ouellette, who was president of the organization in 1996-1997, presented his quarterback Matt Quatrano with his award at the 2010 All-NVL Award Breakfast.

MOMENT OF SILENCE — Prior to their game against Ansonia High School on April 18 at Al Deland Field, the Watertown High School baseball team stood along the third base line for a moment of silence to honor former baseball and football coach Roger Ouellette, who was killed when he was struck by a vehicle on April 16 in North Carolina. (Dreher photo)

PROUD PRESENTER — Among the many organizations Roger Ouellette served during his tenure as football and baseball coach at Watertown High School was the Water-Oak Gold Circle of Sports. Coach Ouellette, who was president of the organization in 1996-1997, presented his quarterback Matt Quatrano with his award at the 2010 All-NVL Award Breakfast.

WATERTOWN — In the space of a year which has delivered so much bad news, it was hard to believe that anything else could leave the Watertown-Oakville community grasping for answers and asking “what else can happen?” Yet it did happen on Friday evening, April 16, when Roger Ouellette was struck down after attending the rehearsal dinner prior to the wedding of his and wife Linda’s son Brian in Southern Shores, N.C.

Mr. Ouellette, 65, a Watertown native and former championship-winning baseball coach as well as the Watertown High School football coach until 2009, was struck and later passed away after being hit by a vehicle while in a pedestrian walkway at 8:20 p.m.

“Friday, April 16, 2021 at approximately 8:26 p.m., officers were dispatched to an injury accident on Ocean Blvd. aka (Duck Rd.) at intersection with Chicahauk Trail, involving a motor vehicle and a pedestrian.

“Upon arrival officers tended to the injured pedestrian until EMS arrived. The victim (pedestrian) was flown to Norfolk General via Dare Med Flight where he later passed away.

“Upon further investigation it was determined that the victim was with his wife and a group of other family and friends they were on the Westside of Chicahauk Trail at the lighted crosswalk attempting to cross over (Ocean Blvd.) to the beach access.

“The victim was struck by said vehicle; the victim’s wife had been approximately five feet ahead of her husband when he was struck; she was not injured.

“There were no indications that speed or alcohol were involved as it relates to the driver of the striking vehicle.

“The victim and his family were here to celebrate the wedding of their son this weekend.

“I ask the Dare County Community to please lift both of these families and their friends in prayer during this most difficult time.

“We thank all of the first responders that assisted our officers on the scene, including Dare Co. deputies, Kitty Hawk officers and SSVFD EMS.”

Mr. Ouellette, who also coached at Cheshire and New Fairfield High Schools, where he coached the Rebels to a state title appearance, prior to returning home to coach at his alma mater, taking over for Bill Gargano on the gridiron in 1989 and for Dom Valentino in the WHS baseball dugout, where he guided the program to a state final berth in 1996 and the CIAC Class ‘L’ and state overall No. 1 ranking in 1997.

The biggest individual star Mr. Ouellette coached was Rico Brogna in his senior season, and he marveled at how the youngster performed under the harsh spotlight of big crowds and under the watchful eyes of major league scouts.

“It was intense, but Rico was such a huge talent, that he turned things up a notch and cemented his status as a top draft pick,” said Mr. Ouellette as he recalled Brogna being the first round selection of the Detroit Tigers, beginning a long career which saw him star for the Mets and Phillies with a brief stop with the Red Sox along the way.

Mr. Brogna, who turned 51 on Sunday, and is now managing the Stockton, Calif. Ports in the Oakland Athletics system, was stunned at the news.

“Roger was such an inspiration to so many of Watertown’s faithful sports community,” Mr. Brogna wrote in a text from the West Coast.

“Coach was a person who truly served with a selfless conviction, and he will be truly missed...it is such a very strange thing to even use past tense...it’s hard to put into words honestly.

“Coach touched so many athletes in a positive way, myself included,” added Mr. Brogna, who served on Coach Ouellette’s staff.

Coach Ouellette, who was highly regarded among his peers for his sportsmanship and intensity, also coached Anthony Fusco, who went onto become a captain on the football team at West Point.

“I want them to play the game and win,” said Coach Ouellette of the student-athletes under his tutelage, “but I also want them to excel in school and take the lessons learned and apply them to real life...that’s what a successful coach does.”

After retiring as football coach, Mr. Ouellette, who was succeeded by Mike Veronneau, Luigi Velardi and current coach Shawn Stanco, the latter two who also served under him as assistants, was a presence at most WHS home games at the Mills Complex (from a distance) over the years, sharing hugs and stories with many former players and just about anyone who came to greet him.

“It’s nice to be remembered,” he would always say with a smile.

Coach Ouellette stepped in for Dom Valentino with the WHS baseball program; Mr. Valentino’s son Jerry would become a trusted aide to Roger Ouellette with both programs.

As so many throughout town, Mr. Valentino struggled for the right words upon hearing of the news.

“Roger was a great person and a lifelong friend; I started coaching with him in 1996 and was with him until he retired.

“He taught me so much on how to be a good coach, and I was privileged to have coach with him for so many years.”

Mr. Valentino added, “The biggest thing I remember about Coach Ouellette is how hard the kids played for him and how bad they wanted to win for him...that’s a rare quality.

“There is not a person in this area that can talk about Watertown sports and not talk about Roger Ouellette and all the good he has done. I am going to miss my friend Roger Ouellette very much, but the lessons he has taught will carry on.

“My thoughts and prayers are with the entire Ouellette family,” Mr. Valentino said.

As of press time, funeral arrangements, which are being handled by the Hickox Funeral Home, are incomplete, said Mr. Ouellette’s brother, Dan.

“We hope to have an announcements of the arrangements in the next few days; on behalf of the family, we’d like to thank everyone for the overwhelming amount of support we’ve been given,” said Dan Ouellette of his brother, who leaves behind his wife of 33 years, Linda, and sons, Brian; Roger, III and daughter Alyssa.

Sorry, there are no recent results for popular videos.

Sorry, there are no recent results for popular commented articles.